A few days ago, I got back from a vacation to Southeast Asia (you can see all the photos I took on my Instagram, if you like). The trip home was long: 21 hours of flying or layover time, and since I can never sleep on planes, I had plenty of time to process the events of the previous ten days or so. Somewhere over Japan, I shifted to thinking about the other places I’d been (I’m not all that well-traveled, at least by the standards of my friend group in San Francisco; by my count, I’ve been to fifteen foreign countries, not counting Guantanamo Bay, Cuba or St. Croix, both of which are still technically the US, but counting various British overseas territories as individual countries), and which moments from all those trips stood out as the most memorable for me.

Now, when I say “most memorable,” I don’t necessarily mean most fun, or most idyllic, or most postcard-worthy, or the like. I mean the things I will never forget: not just the things I’d never have seen if I hadn’t made the trip, but the things I’d have never even known I missed. The experiences that made me more uncomfortable than I would have liked. And yes, a few postcard-worthy moments too.

After much deliberation, I whittled the list down to five, with a second list of honorable mentions. So here it is, in no particular order:

1. The Ice Cave of Scarisoara, Romania (2006). This cave, located near the town of Scarisoara along the southern edge of the Apuseni Natural Park, is widely considered to be one of Romania’s great natural wonders. Most people will never get to fully understand why, though. That’s because the general public is limited to visiting a pair of upper-level rooms that, while beautiful enough in their own right, are nothing compared to the lower chambers that are accessible only by special scientific permit. As luck would have it, on my visit, we had such a permit. The only ways down to those chambers are to rappel sixty feet down, or to tie a rope around your waist and have someone else lower you down. I do not know how to rappel.

There is, of course, no natural source of light at the bottom of the cave, so the researchers we were with had to bring their own. The way those lights illuminated the rippling, translucent ice formations in a spectrum of shimmering blues and pinks is something that will stay with me forever (which is a good thing, since I seem to have lost the photos I took). I still feel bad for the poor bastards who had to pull me back up.

2. The Roof nightclub, Ocho Rios, Jamaica (1994 or 1995). On a three-day break from our duties patrolling the Caribbean in our shiny white Coast Guard cutter, several of my shipmates and I spent a couple days exploring the city of Ocho Rios. One night we stumbled across what appeared to be a nightclub in an old water tower. The stairs were rickety and beginning to suffer from dry rot; the music from above was aggressive and dissonant and not at all like any of the reggae I was familiar with. When the four of us made it to the top of the stairs and went inside, we were the only white people in the place. This wasn’t a problem for any of us, but it seemed to be an issue for some of the people already there. Sensing the hostility, we made a quick agreement among ourselves to have one round and then leave, but then one of us (and no, it wasn’t me) decided it’d be a great idea to flirt with one of the local women sitting alone at the bar. We managed to avoid getting tossed out over the railing, but probably not by much. Good times.

3. Random hot springs in the middle of the woods, Romania (2006). I was in Romania for an academic conference. One night, the lot of us piled into as many cars and vans as we could get our hands on and drove deep into the woods, well away from paved roads, until we came to a small clearing where there was a medium-sized hot spring. There were no lights, no parking spaces, nothing but the hole in the ground. We all stripped down to various levels of undress (the more prepared among us had brought bathing suits) and soaked in the warm sulfur water and drank warm Romanian beer and plum brandy for hours. This may very well be the best memory from all my years as an academic, now that I think about it.

4. The floating villages on the Siem Reap River, Cambodia (2018). The Siem Reap river feeds into Tonle Sap Lake, Cambodia’s largest lake. The river is home to countless houses perched on wooden stilts along the riverbanks; during the high-water season, the water level rises to just beneath floor level. But when you are taking a boat along the river during low-water season, the houses are twenty or thirty feet above you. People use the space under their houses for storage or garbage disposal; kids and dogs play among the pilings. The river itself is so thick with plastic and other trash that our boatswain had to clear the propeller three separate times on our journey to the lake and back. 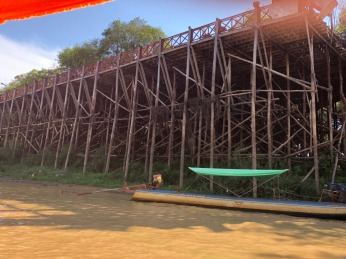 5. The London Tube bombing, London (2005). I was hungover that morning but had promised we’d go see the National Portrait Gallery that day. I asked if we could walk at least part of the way instead of taking the tube (I was pretty sure the fumes and heat and motion would have made me puke all over the other passengers). As it turned out, the Tube was already closed, though nobody really knew why yet. So we had to walk the entire way, and we didn’t find out what had happened until after lunch. My parents – also on the trip – had gone out to the Tower of London before any of the rest of us had gotten up. They were apparently a single train behind one of the bomb-carrying ones. We had no idea if they were all right until they made it back to the hotel hours later, having walked the six or seven miles from Tower Bridge to Kensington.

And here are the honorable mentions:

I’d love to hear about your own top travel memories, so leave them in the comments if you are so inclined.

One thought on “My top five travel moments”